What employer branding taught me about our education

Showing real people when creating people comms is a no brainer.

Call it social currency, authenticity, or common sense, but sharing stories of real people adds weight and importance to any message.

It’s a simple lesson often missed in British classrooms. Which is odd, because as the precursor to a life of enjoyable work, surely education is the biggest employer branding initiative of all. But schools are missing the value of people stories.

Allow me to explain this with two examples.

Firstly, picture yourself in a high school classroom. Your teacher is explaining Osmosis, the passage of a liquid through a semi-permeable membrane. It’s got something to do with Molarity and without it, plants wouldn’t grow.

That’s all I remember, but to be fair to my old biology teacher it’s a tough one to teach in a way that’s likely to be remembered, because unlike electricity or more explosive chemistry there isn’t really a fun way to demonstrate Osmosis. So, with no emotional connection, it gets drowned out in the day’s memory by a game of football at lunchtime, mostly forgotten by the time we’re home.

Next picture yourself in the same classroom, this time being told the story of a French scientist named Henri Dutrochet, who was forced to abandon a promising career in the army when struck by ill health.

Depressed but wealthy, and living with his mother, he threw himself into academia and joined the scientific community. After five long years staring down microscopes, his experiments with plant and animal cells not only connected flora and fauna together forever but turned up a new process he named Osmosis, Dutrochet apparently exclaiming “Mon dieu!” when he realised it was how plants took up water from their roots. He had cracked a secret to life.

He never married. But he has his own Wikipedia page and was immortalised on French coins.

In the second case, did I learn any more about osmosis and molarity? Nope. Do I want to know more about it however? Yeah, who wouldn’t be kind of inspired by this chap’s story, or how making scientific discoveries would make my name discussed and celebrated for generations to come. That’s cool.

So often I hear about fascinating scientific characters – Nikola Tesla and Thomas Edison, Benjamin Franklin, Edwin Hubble – who’s stories of discovery are far more memorable than their discoveries alone could ever be. 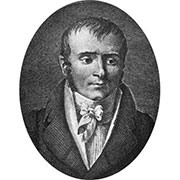 Who cares about AC current? Not your average student, but I bet they’d remember that Tesla once demonstrated its safety by firing a bolt of lightning across a room, through his body and into a lamp in front of a crowd of professors.

That story alone would make the 10-year-old me want to be a scientist, or electrical engineer, and that’s the power of hearing real stories from real people. We understand that in the world of social. I wonder if schools will ever catch up with the rest of employer branding.

Just kidding, try One Hundred and One Botanists by Duane Isely