Editor’s note: Pink Squid are currently celebrating the arrival of no fewer than seven new starters, including Data Analysts, Projects Managers and Creatives. We invited Teo here to share her first impressions of the Farringdon Squid Tank…

You know how sometimes you feel like you just belong? When you’re in a place that’s just right for you? Well, I never did. Until now, that is.

The best thing – I joined the agency just in time for its annual Christmas trip or should I say, the agency’s cancelled Christmas trip, which was supposed to be Marrakech last year. It’s not fun out there at the moment so Marrakech was replaced with a day of Go-Karting and a boozy dinner at The O2. There’s really no better welcome for a new Squid than pain and alcohol. 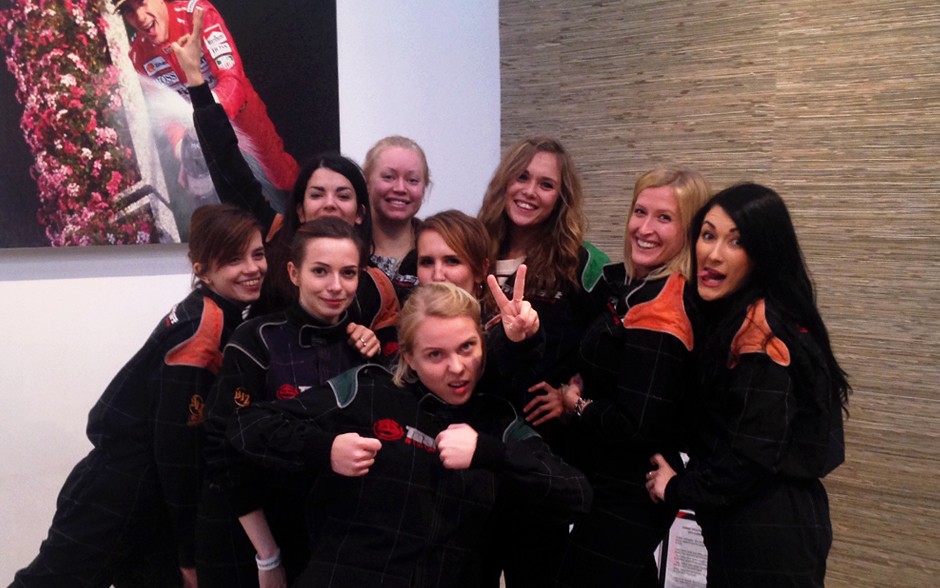 I’m the very gracious and excited one on the left. Little did I know…

Here are a few things I learned back in my first week at Pink Squid.

1. The names of 24 people in 24 hours. I can also tell you where (almost) everyone lives and what they like to drink.
2. They like women here – but not in a creepy way. I’ve had my fair share of London agencies where the creative departments were overflowing with creative boys but girls, not so much. I notice these things. When pretty much half of the agency is made up of girls (in senior positions too), it’s a good sign.
3. Don’t go Go-Karting. When you’re named Captain Slow and you get disqualified after you crash head-first into a barrier and come out with a bloody lip and a wounded finger, it’s a sign you should never ever do it again. Or wear jewellery when you go racing. Rookie.
4. When you sign up for free wifi anywhere in the world just use Jon’s email. He likes keeping in touch. And Ibiza club promotions. And Viagra deals. He really doesn’t mind, at all.
I’m off to do some “real” work now. Toodles!

The aforementioned go-karting was indeed a rough affair. Watch this video for a quick insight… As for race results, all you need you know is Manj was black flagged for repeated overtaking under yellow flag conditions… And Bordoni won, yet again.