If it was this easy, we wouldn't need you

JLR is all about creating prestigious, stunningly impressive cars. They’re the making of most people’s dreams. Most people apart from our target audience that is. This campaign needed to rely on something other than the cars to be successful. 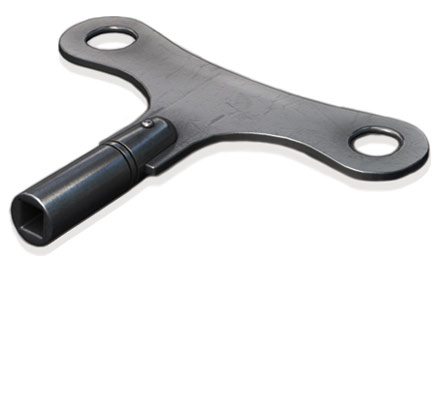 Over the next three years, JLR need to have hired 500 new Electrical Maintenance Technicians – the individuals who maintain the state-of-the art production line and ensure trouble-free manufacturing. Owning a Jaguar or Land Rover doesn’t resonate with this audience, so this campaign taps into their mindset in an everyday manner they can relate to. As well as print, the ongoing campaign uses radio, cinema, football and industry events, online media and display networks. 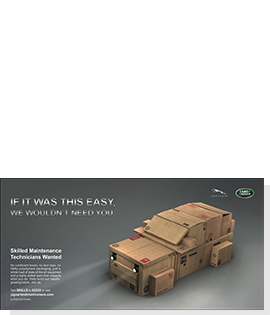 99.9% of our target audience are male, passive job seekers – the majority are not car enthusiasts. 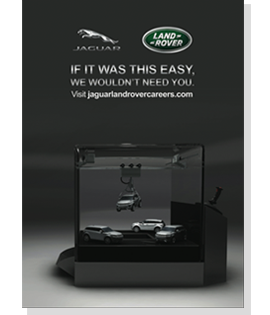 Extensive research revealed the tradition of stealing talent from nearby automotive industries had dried up – new avenues needed to be sought. 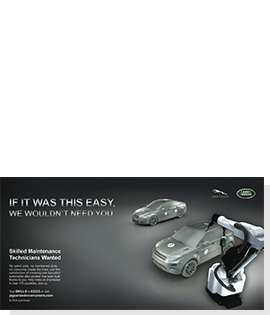 The concept places the emphasis on the importance of the audience’s role in creating JLR’s cars – making the person the hero instead of the end product. 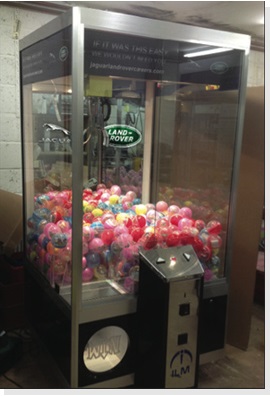 Grabbing candidates at the NEC

As part of the larger integrated campaign, we targeted The Engineer Conference at the NEC, Birmingham and brought the concept to life as a grabber. It not only attracted and engaged with the audience, but resonated with those who saw JLR as a place where they could use their skills to make a global impact. Poaching cards were given away with prizes.

JLR seen on the big screen

The cinema ad targeted our core demographic by being shown before films such as ‘Rush’. It was shown over a two week period in cinemas across the West Midlands, where the majority of JLR’s key facilities are located. An estimated 420,000 people saw the ad. The ad drove people to jaguarlandrovercareers.com. 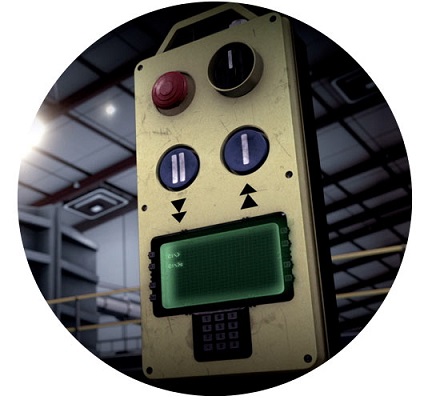