Let’s rewind a month. To mid-December.

First things first, the competition. “Plan our Christmas party. The brief is to go as far as possible.” With that Manj and Tsz, left the room and the rest of us were left to ponder. When we reassembled, all manner of ridiculous ideas were pitched, from travelling around London on the Circle Line for eight hours to cramming into Manj’s car and going somewhere that had hot tubs. Thankfully, though, sanity was found. With its very own pink street, the undoubted winner had to be a trip to Lisbon with our own tour guide/art director extraordinaire, Ana Quina.

After acquiring some stylish onesies, we got down to the important matter of Portuguese lessons: “Não estou com else” (I’m not with them) and “Despacha-te Manj o teu cabelo está fantástico!” (Hurry up Manj, your hair is great!) leading the way. The next event was to get our motley crew to Gatwick in one piece, including Taelon (whose face was now twice the size after a cosmetic reaction), Jon (who missed the train on 2012’s trip to Paris) and Keith (who was having the best first week at work ever – two days at work, three days in Portugal). We all made it. Sort of. 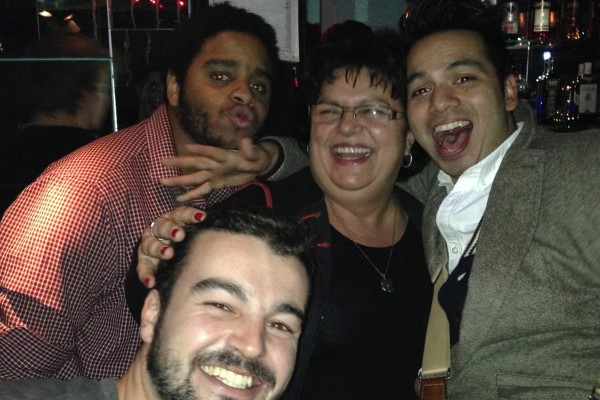 Night one, some traditional Portuguese dinner, and some dodgy goat’s cheese which threatened to wipe out half of the team. It didn’t stop us wandering down the famous pink street to Bar da Velha Senhora, where we started the second part of the night by being abused by a jazz band. Jenna, Jon, Steve, Amy and Steph left proceedings there and went back to the boutique hostel to compare blisters, while the rest of us headed off to Pensao do amor – a bar in an old brothel, with cowboys, graffiti and giant gin and tonics. Squid heaven. Then onto some other bars, onto making friends with strange people and onto more blurry memories. 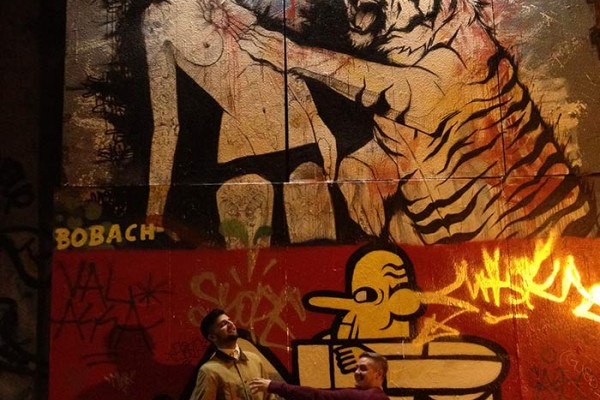 With some sore heads in tow we started our day down in Belém in search of the best nadas in the world. After seeing some beautiful fountains, scenery and sites in Lisbon we headed back to the centre to sample some real Portuguese peri-peri chicken at Bonjardim. Research of course for our client, Nando’s.

Then more alcohol… this time Ginjinha, a traditional cherry-based wishing drink. Jenna and Steph’s wish appeared almost immediately. How their little faces brightened at the sight of a vintage shop. Bored and restless, the non-shopaholics among us (and Manj) were after some more sightseeing, so we wandered to Castelo de Sao Jorge. Which was closed.

To Casa do Alentejo we went for the final meal of our trip, and while the food didn’t quite match the grand Arabic architecture in this old casino-turned-restaurant, it at least lined the stomach for one last glass of port. Weary and on our last legs, we summoned enough energy to make it to the Paviljão Chinês (Chinese pavilion), where – like real tourists – we played pool through cigar smog in a room filled with toys, memorabilia and Americans. Definitely a real Portuguese trip full of locations you’d only get to see if you are aimlessly following around someone local. Well done us.