I’d been in two minds about joining the protests, right up until my iPhone alarm cut through my Sunday morning lie-in.

On one hand, I felt like I couldn’t not go. Recent events have been weighing on my mind pretty heavily, as they have for many people. I felt like I had to get out there. To physically do something. Push for the change that we were tired of asking for.

And on the other hand?

The world was only just getting to grips with 2020’s biggest plot twist. You couldn’t think of a worse time for a mass gathering to take place.

But has there ever been a right time to protest? 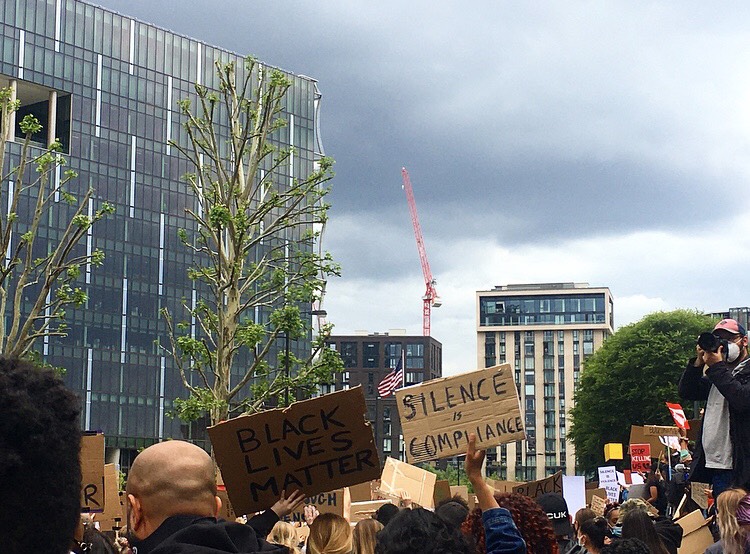 With the cuffs of my black jacket covering up the phone numbers scrawled on my wrist and a mask in my back pocket, I headed out to meet with a few friends before we walked up to the US Embassy and joined up with the others.

To say it was powerful, wouldn’t be doing it justice. And to be honest, ‘powerful’ is overused these days. Smartphone manufacturers and trainer brands describe themselves as powerful.

Hundreds of people from different walks of life, all there for one simple reason.

Some chants were more positive than others.

But the mood never turned. Considering the videos of what happened the day before (apparently that horse is still running), I wouldn’t have been surprised if it had changed. But the phone numbers of law firms offering legal aid for arrested protestors were a waste of ink on my wrist.

The day was lively and energetic, but peaceful. Thankfully. The last thing protestors needed was to be framed by more traffic lights.

When I finally got back home, I was pretty content. The itch to get out there and get involved had been scratched. And that satisfaction lasted for about a whole ten minutes.

Showing my face at every protest was a health risk, and even if I did, they wouldn’t last forever. I needed to do more.

Fast forward to earlier today, when I was given the chance to host a learning lunch session to the rest of the agency on how the use of language has influenced racial tensions within the US. By the time I’d finished, pretty much everyone was silent.

Ah. It sounded like my points had gone down as well as a statue through Bristol Harbour.

But then the silence broke, and after the presentation ended, I had people messaging me to discuss the issues I’d brought up. No matter how awkward it was.

That was pretty satisfying, and I’m still feeling it now. While I’m still glad I went out and protested, being able to influence the conversations I had with my colleagues today was huge, and probably made more of a lasting impact.

The protests in the US have made serious progress in getting unjust laws changed, and the conversations being had have given the movement the most attention it’s ever had.

A standalone act of defiance will catch people’s attention, and an open dialogue is what will get people to think differently. So we have to use the best of both.

Like the faded ink on my wrists, a timeline full of black squares was important on the day.

But we need more permanent change than that.